Google’s ‘Open’ Eddystone vs Apple’s iBeacon – Which One Works Better for You. - Whitelotus Corporation

Google’s ‘Open’ Eddystone vs Apple’s iBeacon – Which One Works Better for You. 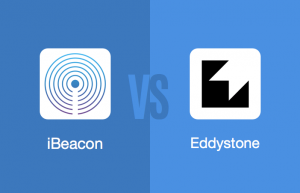 Beacons are discoverable by devices that use BLE, a power-efficient version of the Bluetooth wireless technology. They transmit an identifier that a smartphone or other device looks up to get data, typically related to that beacon’s location. Some beacons can send other data, such as from sensors.

Eddystone, found on GitHub, serves as a protocol specification describing several different frame types. It is meant to work well with both Android and Apple iOS Bluetooth developer APIs, to be compliant with the Bluetooth Core Specification, and to have a straightforward implementation on a range of BLE devices. Apple’s iBeacons technology protocol, by contrast, works only with Apple devices.

To enable better semantic context and precise location, Google is introducing as part of Eddystone its Nearby API, enabling Android and iOS apps to more easily communicate with nearby devices and beacons, and its Proximity Beacon API, associating semantic location with related data and beacons, stored in the cloud.

With its open-source approach, Google is allowing for more flexible approaches. One example it used was when you are looking at a piece of art in a museum. With a beacon, you could be alerted to more information about that art. If implemented with Eddystone URL, the user could have an easy way to access that contextual information in a browser without cluttering up his or her device with yet another app. Since it’s open source, the developer community can add to the specification and increase its capabilities.

Can Eddystone become the de facto standard for contextual information and services? Time will tell as developers start building applications. With firmware updates, beacon device manufacturers like Radius Networks, Kontact.io, and Estimote will support both formats. The real competition isn’t in defining the information formats that these devices will transmit; it will be in the APIs and services offered in the platforms both on iOS and Android and in the cloud services. In that sense, it’s possible that Apple could simply take advantage of the open source nature of Eddystone and work within it, while both Google and Apple keep other parts of iBeacon technology proprietary.

Google itself is starting to improve its own products and services with beacons, the bloggers said. Google Maps leverages beacon-based transit notifications in Portland, Ore., for faster access to transit schedules, and the Google Now personal assistant app soon will use contextual information to prioritize relevant cards, such as showing menu items in a restaurant.

Contact Whitelotus Corporation to request a free demo and or discuss your app idea using Apple’s iBeacon or Google’s Eddystone for your business, drop us email to contact@whitelotuscorporation.com.