Google on 14th july 2015 announced Eddystone, an open-source beacon platform that may gives competition for iBeacon standard used by some businesses and attractions, and also including Apple Stores. Bluetooth beacons are part of the Internet of Things (IoT) trend. They’re little transmitters (usually battery powered) that send out information about a specific point of interest, and that info is then passively picked up by a smartphone or tablet in range of the transmitter. A beacon-equipped bus stop could send out transit times, stores could send promotions to the customers currently in the store, or a museum could send people information about the exhibit they’re standing in front of.

Eddystone is a completely new method of broadcasting BLE data from beacons, created by Google but open to extension by the Internet at large. It embraces what iBeacons can do, and adds even more real-world context to it. 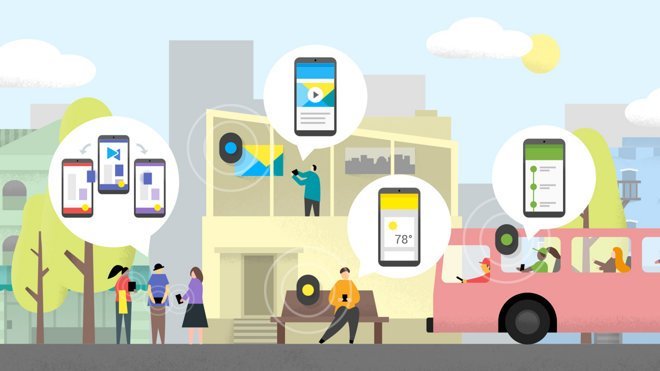 Eddystone is meant to be the most robust and comprehensive beacon format, so it supports both Android and iOS. Finally, your proximity-enabled apps can perform as designed on both systems. Since common push notification issues on Android devices have been solved, you don’t have to worry about that any more.

Eddystone is open source Bluetooth Low Energy (BLE) beacon format. The aim of this designe is to help mobile apps developers work with beacons and provide it location-based content straight to users’ smartphones.

If you’re not familiar, beacons are low-energy battery-friendly hardware that use Bluetooth to transmit data. Since Bluetooth connections have a much smaller range public Wi-Fi and work indoors unlike GPS, it allows retailers, developers and companies to precisely pinpoint the user’s location and send relevant information based on where consumers currently are.

With Eddystone, Google is hoping that Mobile Apps developers will be able to build even more contextual apps. For example, a user’s phone might provide transit times when they are at their local bus stop, or bring up an event ticket bar-code when they’ve arrived at the venue.

Alongside the launch, Google will offer the Nearby API and Proximity Beacon API to help developers focus on how to transmit data to devices that are in range of select beacons, while allowing them to monitor beacons to make sure everything is running smoothly.

For now, Google does not plan to charge for Eddystone. With Eddystone, Google is hoping that mobile application developers will be able to build even more contextual apps. For example, a user’s phone might provide transit times when they are at their local bus stop, or bring up an event ticket bar-code when they’ve arrived at the venue.

Beacon technology to provide value added content to customers, across the globe. Whitelotus Corpoaration offers a way to develope the beacons apps using Eddystone to Boost you Apps – Discuss your Beacon app Development plan with us and click here to get a free quote.